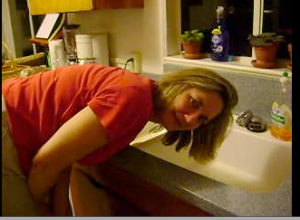 Wednesday night, I was pretty tired. I have been working days and nights straight to get ready for the launch of Walnut Creek Patch, for which I’m the news editor. On the eve of the launch, Wednesday night, my son told me I should take a break and watch American Idol with him.

During the previous two seasons, we got hooked, to the extent that we voted for our
favorites after the shows: David Cook in 2008 and Adam Lambert in 2009.
This year, during Hollywood week, we started to lose interest. No, we didn’t miss the loopy diversions of Paula Abdul. We thought the judging panel, with the addition of Ellen Degeneres, brought a new level of professionalism to the process. It was the contestants that bored us. No one really stood out–as a musician or as a personality.
So, we didn’t watch the Idol showdown on Tuesday night (I couldn’t; I was at the City Council meeting). But we decided to catch the end of Wednesday night’s show. Pretty lackluster and even embarassing at times. The Pants on the Ground guy, singing with a vocal and dance backup? Sucked all the charm out what was probably the singular performance of the whole season.
The tribute to Simon Cowell was okay, but I was started to nod off over my laptop when eventual winner Lee Dewyze performed a medly of songs with the band Chicago.
“I have an idea to keep you awake,” my son said. He knew that after the show I’d have to stay up much later to get everything ready for Thursday’s launch.
And that idea had me leaning over the sink, and him pouring something very bracing over my head: He water. He did it, and we haven’t laughed so hard, since, well, Sunday night’s Family Guy parody of The Empire Strikes Back. Watch me getting iced here. Click on the image twice, then hit play.

6 thoughts on “Getting Iced: Son resorts to a drastic measure to keep me awake the night before Walnut Creek Patch launch and during American Idol finale”