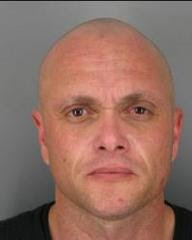 Walnut Creek police on Thursday found a 41-year-old Martinez man in possession of the jewelry and computers he had allegedly stolen from a Huston Road home earlier in the day–all thanks to an observant and quick-thinking citizen.

At about 12:30 p.m., a citizen heard a loud banging coming from the home of a neighbor in the 1300 block of Huston Road. The neighbor noticed the front door of the house had been kicked in and saw the suspect, later identified as Jebba Catley, loading items from the house into a 2000 silver Dodge Caravan.
According to Sgt. Tom Cashion, “the citizen did a great job obtaining a license plate while the suspect was leaving the residence and called the Walnut Creek police.”
While officers responded to the house where the burglary occurred, detectives went to the Martinez address of the van’s registered owner.
Detectives arrived with Martinez police as the suspect was leaving his Walnut Avenue home. In the suspect’s van and another vehicle, the detectives located the propertythat had been taken from the Huston Road home. Catley was arrested on suspicion of burglary and possession of stolen property and was booked in the Martinez Detention Facility with bail set at $50,000.