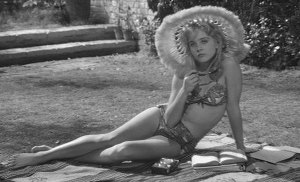 Lolita, light of my life, fire of my loins. My sin, my soul. Lo-lee-ta: the tip of the tongue taking a trip of three steps down the palate to tap, at three, on the teeth. Lo. Lee. Ta.

–Vladimir Nabokov’s famous opening lines to Lolita, his brillliant but controversial novel about an aging man’s love for a certain nymphet.

Teenage girls in string tops and “tight cheekless” shorts, waving signs, inviting motorists passing through the Ygnacio Valley Road and Civic Drive intersection to come into one of the gas stations to get their cars washed.
It was all to support their high school fundraiser Saturday. (A friend, who witnesses this scene said they were from Northgate High.) You see these fundraisers for different school groups all the time at the gas stations at this intersection.
This is scene Saturday witnessed and described not just by my friend but by blogger Mister Writer. You can read more details about what he saw and comments about the scene at his website.
We have a weird thing going on with our culture. On one hand, and in the worst-case scenario, we’re horrified by men like Phillip Craig Garrido who view pre-teen and teen girls as potential sex slaves to be kidnapped, abused, and raped. In a not-so-worst case scenario, we don’t want our pre-teen or teen-age daughters to become sexual, certainly before they are emotionally ready.
But then, fashion and culture dictate and some parents allow their pre-teen and teen daughters to go out in public, including to school, in tight underwear-like tops that accentuate breasts and expose midriffs and in short shorts and short skirts that show butt cracks, cheeks, and thighs.
These outfits basically say f—- me.
Do you think girls who are wearing these clothes are doing so out of their own emerging sense of power, sexual or otherwise? I doubt it. Most girls are naturally modest and can be a bit mixed up. On one hand, they are probably trying to adjust to the changes in their bodies–breasts, periods, etc.–that signal that, biologically, they are ready to have sex and have babies. They feel weird about it and are just trying to get comfortable in their own skin. At the same time, they are curious about falling in love and what having sex is like.
Many also care about trying to please and–unless they’re gay–to win the attention of boys. So, some girls will go out of their way to dress like Brittney and other nymphet heroines of pop culture. They think that’s what’s expected of them to be seen as attractive and desirable.
Bottom line: I doubt very much that the girls at this carwash were dressed, as Mister Writer described, in order to exert their personal sense of power and individuality. They were trying to fit into some socially prescribed idea of what girls should do to get attention–whether it’s from males, whom they want for boyfriends–or from motorists, whom they want to sell their fundraising carwash services.
I don’t have a daughter. If I did, I’d like to think I would not let her out of the house or go out in public in the way Mister Writer described. Not because I’m a prude, but because I’d want to to grow up with more self-respect.