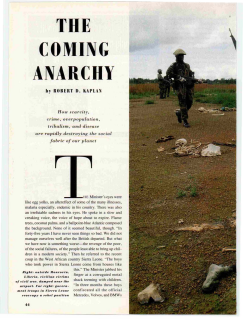 Last Tuesday night’s Mt. Diablo Unified School District board meeting, to decide the fate of Clayton Valley High’s charter school proposal, devolved into “a divisive hissing contest between us and them,” wrote Contra Costa Times columnist Tom Barnidge. The sentiments expressed among the more than 400 people crammed into the meeting were less about educational vision than the “me-first fears of budget cuts that might befall them to support Clayton Valley’s dream.”

I’m no genius at economic theory, but it sounds like we have, right in our community, a shining example of what happens in times of economic scarcity.  Not to go all Malthusian on you, but I am intrigued by those arguments about dwindling resources leading to social breakdown and conflict.


As I was re-reading the Barrnidge column, I couldn’t help but make what some would view as a pretty big leap. This is to a famous 1994 magazine article The Coming Anarchy by Robert D. Kaplan, the magazine’s senior fellow at the Center for a New American Security, in Washington, D.C.

The article, published in The Atlantic, was pretty mind-blowing and widely translated and debated in public policies. It carried the subhead: “How scarcity, crime, overpopulation, tribalism, and disease are rapidly destroying the social fabric of our planet.”

Discussing how population increases, urbanization, and resource depletion are undermining governments, the article was a sobering view of human civilization in the coming century. It begins with a  devastaing description of the West African nation of Sierra Leone, in the grips of criminal lawlessness committed by roving bands of young armed men and boys. In the essay, Kaplan said “West Africa is becoming the symbol of worldwide demographic, environmental, and societal stress. … [It]  provides an appropriate introduction to the issues, often extremely to discuss, that will soon confront our civilization.”

OK, here I am comparing the rift surrounding the Clayton High charter school debate to chaos in a developing country beset by overpopulation, unprovoked crime, private armies, disease and an increasing erosion of the nation state. Apples and oranges?

Probably, but I still can’t help but think that we in America suburbia of 2011 are not immune to the internecine conflicts that arise in a group when there is not enough to go around of whatever is needed for survival. Resource scarcities–of various types–have become a reality of life these days.

In Kaplan’s article, he suggests that a minority of the human population will be sheltered in what political scientist and author Francis Fukuyama described as a ” ‘post-historical’ realm, living in developed world cities and suburbs in which the environment has been mastered and ethnic animosities have been quelled by bourgeois prosperity.”

Remember, this article was written nearly 20 years ago, before there was the global economic crisis that started in 2008.

In our new era of the foreclosures, the Occupy movement and the 99 percent, I don’t know that many of us are living these days in a bubble of bourgeois prosperity.

Some of Kaplan’s theories might need to be revised, but the basic premise? It’s still timely and intriguing.