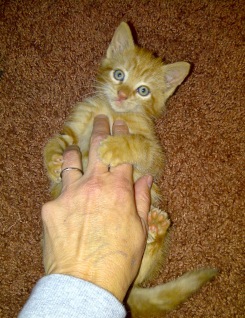 I think I know a little bit about how Cher must have felt. Yesterday, we took our new kitten, our little girl whom we named Pandora, to the vet.

My head was spinning. Boy? In less than a week, I had developed my whole concept of our new family member’s identity around the belief that it was female. She was so cute, so little, so in need of love of protection.  Also, my son had come up with a rather unique, elegant and feminine name for the new cat: Pandora.

But now the vet was telling us news that suggested that “Pandora” wasn’t suitable, not unless we wanted to give her–I mean, him–a gender identity disorder.

And, you’re not going to grow up to be some sleek, elegant tabby girl but a big, hulking tabby Tom.

Giving up on the name Pandora would prove to be just one of our difficulties. We also had to begin using the appropriate pronoun to use. Not she. Not her. Not “Hey, little girl.”

As we paid the vet, we joked with the staff of young women, who all fell all over our cute, 4- to 5-week-old kitten, that we had brought her in for a sex change.  Well, for what we paid to the vet, I guess it was a rather inexpensive sex change.

A new naming conference took place over milkshakes and a mocha almond fudge sundae at San Francisco Creamery. Once again, my son struck on something that could work: Pippin.

With Pippin, my son was thinking of the hobbit Pippin from Lord of the Rings, who joins Frodo in the Fellowship of the Rings.

The name immediately made me think of the hero of the 1970s Bob Fosse Broadway musical. Of course that Pippin is based on a real life figure from the early Middle Ages. Pippin, or Pepin, was the oldest but illegitimate son of Charlemagne, one of history’s greatest kings who consolidated much of western Europe into what became the Holy Roman Empire.

Pippin (at top right, with Charlemagne at top left) was supposed to be a handsome, friendly guy. Well, so far our little Pippin seems to be a pretty — I mean, handsom — friendly guy.

But wait, the historical Pippin’s looks were marred by a “spinal deformity.” Pippin was a hunchback.

And, although popular at court, Pippin got involved in intrigues that led his father to try him for treason. Pippin escaped execution when his father  (nice dad!) sentenced him to a monastery to live out the rest of his life.

So, the historical Pippin was a bit of a bad boy. Well, that seems to describe our feisty little kitten pretty well.  I have the scratch marks on my ankles and arms to prove it.