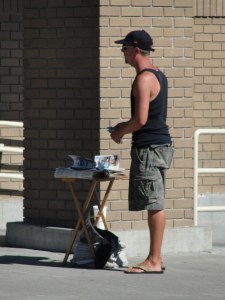 So, the East Bay going to lose its local newspapers, including the Contra Costa Times. That was the big news in the media world Monday and Tuesday. It was interesting then on Tuesday to see that the Times had at least one person out at Walnut Creek’s downtown Safeway, trying to get people to buy new subscriptions.

Yes, I know that the spin put out by the Bay Area News Group, the owner of the Times, the San Jose Mercury News and the Oakland Tribune, is that the company is going through a process of “re-branding.”

And that this streamlining process will lead to many “positives” and “efficiencies,” BANG’s president Mac Tully said in an interview with the San Francisco Chronicle.

Maybe this is true: that this will be a good thing, a necessary thing, in this economy and in the news and publishing industry. It doesn’t seem like much of a good thing to Walnut Creek residents, who hunger for local news, and for people who work at the Times and in journalism.

Current and former Times staffers have written on Facebook, expressing feelings of shock and sadness about the closure of the Times‘ Shadelands office. Current staffers also spoke of the fear of being among the 120 employees that will be laid off in the consolidation. I’m afraid that people I know and respect will lose their jobs.

I don’t have anything really profound to say about what is happening at the Times, or about the state of journalism in general. I, too, am in shock and feel sad about it all. For all of my professional life, the Times was an unquestionable presence in town, operating out of that big office building in the Shadelands business park.

I worked for Times satellites, the Valley Times and the West County Times–which will soon be no more. I’d only go work in the mother ship on special occasions, when lowly me was afforded such a privilege.

I understand people’s views that the Times could be arrogant and tone deaf to local concerns. Maybe all big news organizations are like that. This attitude drove me crazy enough that I started this blog.

At the same time, I believed then and still believe that the work of Times‘ very talented reporters, photographers and editors pushed me to do better work. That competition is healthy. It keeps journalists on their game, and makes them more responsive to readers.

And, actually, I do think the Times had become more interesting and readable recently. Since I left Walnut Creek Patch and wasn’t online all the time, I’ve been revisiting my morning ritual of drinking coffee and scanning the actual hard copies of the Times and the Chronicle. On an almost daily basis, the front page of the Times has been winning out over the Chronicle in terms of headlines, stories, story placement and presentation, that made me think, “I have to read that.”

OK, so the Times will continue to publish “local” sections, according to Tully. We’ll see how local these local sections will be.

And, no, I didn’t stop and talk to the guy in the Giants cap about buying a subscription to the Times. As I suggested above, I already have one.