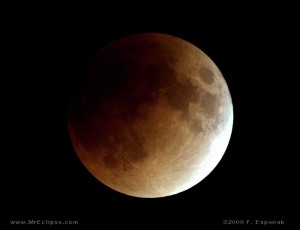 In January 2000, scientists from NASA and other organizations told people in the North and South America to be prepared to witness an amazing astronomical spectacle: the total eclipse of the moon. This would occur on the evening of Jan. 20.

Apparently, such an event can only take place when there is a full moon, and only if the moon passes through a portion of the Earth’s shadow.
I must have been reading about all about the lunar eclipse that Thurday, or hearing about on the local radio.
It was to be a rare enough event and one of great beauty. It was scheduled for sometime around 8 p.m., Pacific time. Yes, that was a bit after our son’s bedtime. He was less than 2 years old at that time, but I thought it couldn’t hurt to keep him up a little longer and share this celestial event with him–even if he would be too young to understand or remember.
One concern many in Humboldt County would have on this day would be the weather–and whether the weather would allow them to see the eclipse.
One of those big Pacific Northwest storms had been passing through Arcata and the rest of the coastal region. These winter storms off the far North Coast of California are incredible to behold. I suppose they are not unlike storms–severity-wise–that we have in the Bay Area.
It’s just that the North Coast setting gives these storms their drama and their beauty. On a stormy day, you can drive up 101, along the redwood-covered bluffs overlooking the Pacific Ocean, between Arcata and the state and national redwood parks. You can look west over the expanse of the Pacific Ocean. Above the ocean is the sky, all shades of gray and black. Both ocean and sky look as if they are massing for battle.
But it’s beautiful, and I would love to take my son on drives up 101 on stormy winter days. After a stop at some vista point to look at the ocean and sky, I drive us some more, sometimes in the hope that he’d fall asleep for his afternoon nap.

Such a drive probably happened on this Jan 20., the day of this amazing lunar eclipse.
Fortunately by nightfall, the storm clouds over Humboldt County had parted. Those of us living here would be able to see the eclipse.
“It had rained in the afternoon. Poured,” I wrote in my journal for that day. “But the clouds cleared away, so that by the time the moon started rising between the redwoods behind our house, the skies were perfectly, breathtakingly clear.”
“It was a cold night, but not too cold. I had dressed our son in his pajamas, and wrapped him in a blanket,” I wrote.
My son was a bit sleepy.
I was in my usual tights and sweater. There was a built-in bench on the redwood deck of our house in Arcata. I don’t know where my husband was that night. Working? On a business trip? Just inside–depressed–and not interested in the lunar eclipse?
As I sat on the bench, still damp from the afternoon’s early rain. I held my son on my lap.
As we waited for the amazing eclipse, I talked to him and tried to tell him some of his usual bedtime stories. He became tired and fussed, indicating he wanted me to take him upstairs to his room and put him to bed. I wondered if the cold night air, and the desire to be all cuddled inside, had made him sleepy.
“Slowly, a shadow passed over the moon, reducing its width to a crescent,” I later wrote. “I don’t think I’ve seen so many stars in the sky above our Arcata home. Millions and billions of tiny pinpoints of light. … There were so many, I tried to imagine discerning the points of constellations. … It was like trying to divine shapes in a pointillist painting.”
I showed all the stars to my son. He settled down and looked up through sleepy eyes. He yawned and became still. I held him outside a bit longer, as the earth’s shadow moved in front of the moon, making it burn colors of dark orange and gold, like embers in a dying fire. And as the moon darkened to its soft, low gold, the stars brightened even more.
Later that night, after I had put my son to bed, I looked out the window. The moon was back in all its glory: full and bright.