No, I’m not talking about Lindsay Lohan or Britney Spears. It involves an actress whose story I came across when I had some free time the other night to surf the Internet and read different articles on one of my favorite guilty pleasures: Hollywood scandals of the past.

The actress is Frances Farmer. She was 32 at the time of her arrest in Antioch, and her arrest took place more than 50 years ago.

You might have never heard of Farmer but her brains, talent, and blonde beauty made her a top Hollywood and Broadway star in the 1930s. She was declared “the next Garbo.”

While the Seattle-born star was considered brilliant, she was also willful, and rebellious. As a Seattle high school student in the early 1930s she won a national writing contest with an essay, “God Dies.” While studying drama at the University of Washington, she won a trip to the Soviet Union to see the famed Moscow Art Theater, a trip that earned her the label “atheist” and “communist.” 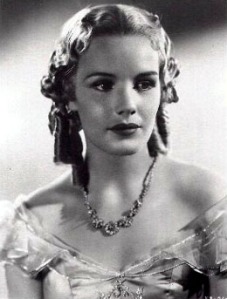 By 1937, the 24-year-old was in Hollywood, signed to a seven year contract. Even with everything going for her, her talent for self-destruction and mental illness quickly became apparent and she wound up being declared legally insane and institutionalized for more than six years.

Her fall from fame, and her battles with Hollywood, the legal system, and the mental health system created a legend around her, inspiring three books, three movies—including the 1982 film Frances, starring Jessica Lange—several off-Broadway plays, and a song by none other than fellow Washington native, Kurt Kobain. In his song, “Frances Farmer Will Have Her Revenge on Seattle,” he sings the line: “She’ll come back as fire, to burn all the liars, and leave a blanket of ash on the ground.”

According to the legend around her, described in this Washington State history online encyclopedia, the “the idealistic young actress challenges the hypocrisy of her world and becomes the victim of a spiteful mother, a vengeful Hollywood, and a cabal of callous and arrogant psychiatrists. Together they force her into a state mental hospital, where she is brutalized by electric shock and other barbaric treatments; raped by orderlies, fellow inmates, and soldiers from a nearby Army base; and eventually lobotomized. Her rebellious spirit finally shattered, she leaves the institution an atomized half-woman, only a shadow of the vibrant artist she had once been.” (Other strong evidence suggests her treatment was never so brutal, and there was never any lobotomy.) 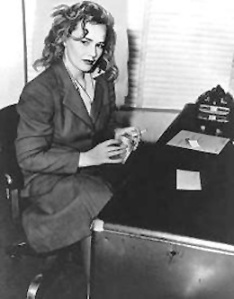 At one point in her slide into madness and institutions, she turned up in Antioch, where in July 1944, she was arrested for vagrancy. (The photo here shows her being arrested in Santa Monica in 1943). This was after her second hospitalization, and after being diagnosed with paranoid schizophrenia, and undergoing repeated rounds of insulin shock therapy and electro-convulsive shock treatment. During a respite from hospitals, she traveled with her father to visit an aunt in Reno, but she ran away and spent time with a family who picked her up hitchiking. Her vagrancy arrest in Antioch received wide publicity.

A July 24, 1944 article in the San Jose Evening News, says “Blonde actress Frances Farmer, 30, who graduated from the University of Washington into a brief Hollywood movie stardom, was picked up today on a vagrancy charged three weeks after she was released from a Washington state sanitorium.

“She is broke and on her uppers,” said Antioch Police Chief Al Leroy. “Sometimes she makes cracks about cops, but we change the subject and get along fine with her. She seems to be in good health, mentally and physically.”

Leroy said Capt. Harry Boyer of the Antioch police picked up Miss Farmer beside the highway outside Antioch during the night. Farmer had been missing for about three weeks, and had been the subject of a secret search for 14 days. Farmer had been staying with her father in Reno, when Frances just disappeared “without even taking a toothbrush,” her mother told the news.