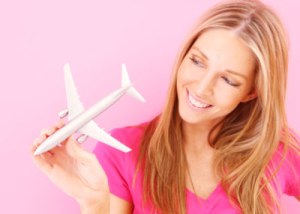 My 12-year-old son had a little adventure this morning as he was taking his seat on a Southwest Airlines flight bound for San Diego. He was flying to San Diego for spring break, to spend the week with his aunt and uncle.
He was just settling into his seat at the front of the plane when he became aware of a commotion involving a female passenger, a young blonde woman. This blonde, who was in the company of another blonde, was trying to shove her carryon bag into one of those overheard compartments.
All of a sudden, Blonde No. 1 let out a big, scary scream.
A flight attendant came speeding down the aisle, asking: “What’s wrong? What’s wrong?”
The poor flight attendant, as well as the passengers, were thinking of all the worst-case scenarios that can happen on an airplane these days.
For purposes of full disclosure, I should add that my son is himself a blond. So, he has nothing against blondes. He also lives with a wanna-be blonde–me.
I should furthermore add that he was flying all by himself. It wasn’t the first time he has traveled on an airplane by himself, but it was the first time he had to get through security and to the gate by himself. He just turned 12, so he’s no longer eligible to have Mom and Dad accompany him through security and up to the gate. He’s no longer going to wear one of those unaccompanied minor passes hanging around his neck. And, he can no longer expect airline staff to make sure he’s safe in the terminal or that he gets to the gate and catches the plane.
I add this background about my son because he was perhaps feeling nervous about traveling this morning–truly on his own for the first time. But knowing him, and his young male pride, he would never admit that he was feeling tense…
But maybe, the blonde letting out her scream heightened whatever tension he was feeling.
Anyway, everyone’s eyes were on the blonde as the flight attendant reached her. “What’s wrong? What’s wrong?’
The blonde’s reply? My son swears on it, though he knows it’s almost too good to be true:
“I broke a nail.”

Yes, she said that, my son says

And, yes, sometimes, the truth is stranger and more amusing than fiction. Or a good blonde joke.

3 thoughts on “Blondes on a plane! My son swears he is NOT making this up …”