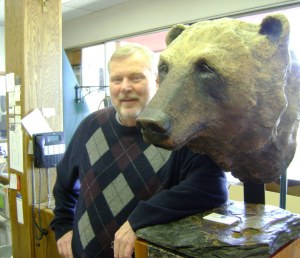 I was walking south along North Broadway the other day—on my way to blond up my hair a little at Changes Salon, if you must know.

As I approached Lincoln Avenue and the new library construction site, I turned my gaze up… To the sky or something… Anyway, I saw what others of you may have noticed from time to time. Standing up along the fourth floor balcony of the building that houses Changes were a series of sculptures of bears and other animals, and a sculpture of a man in a coat waving down to people on the street.
Curious, I thought. Another sign that Walnut Creek isn’t just some placid, boring suburb, but that its population includes, well, interesting characters, such as the sort of person who would choose to line the fourth-floor balcony of an otherwise non-descript suburban office building with sculptures.
After my appointment, I popped into the lobby of the building at 1475 North Broadway to see who or what business occupied the fourth floor. Great timing, because a friendly gentleman waiting to catch the elevator was more than happy to tell me what those sculptures were doing there.
That’s because he, himself, is the artist. And, this artist, Kent Jacobson, invited me up to his fourth floor business to see the sculptures himself.

Like a lot of us with all-consuming hobbies, Jacobson has a day job. As the “Jacobson” in Taylor and Jacobson Inc., he designs and makes custom jewelry: diamond rings and special-occasion pendants. Taylor and Jacobson has been doing the custom-design jewelry work for 20 years. (Pictured above is Kent Jacobson in his jewelry design business, with one of his bear sculptures.)

On the side, and as much as possible, the Moraga resident produces wildlife sculpture and paintings. His love of fly fishing has taken him all over the lower 48 states, Alaska and Canada. He specializes in sculpture bears and large cats, cast out of bronze, stone, or granite. Some of his animals are life-sized and in motion. He also loves to sculpt busts of animals, because he can focus more on the details of the animal’s face–to give it character. He says it’s his way of “honoring the animal.”

You can find many of his wildlife sculptures displayed at the Lindsay Wildlife Museum, and UC Berkeley possesses a nine-foot-tall walking bear that he made of cast stone. He also paints brightly colored images of bears, fish, and other wildlife.

But he doesn’t just sculpt animals. He also does an occasional person, including Babe Ruth, who stands in a camel coat, waving down on people passing by on North Broadway.
If you want more information about Jacobson’s “hobby,” visit his website at KentJacobson.com. If you want to commission him to design you a ring for an engagement or anniversary, you can reach him at his Taylor and Jacobson website.

4 thoughts on “What are Babe Ruth and bears doing on Broadway in Walnut Creek?”