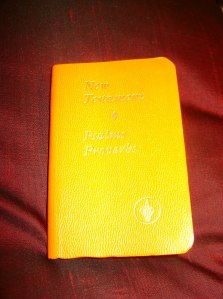 My son and his friend, whom I meet at the 7-Eleven parking lot on Oak Road, plopped into the car, and my son announced “This guy was handing out Bibles after school.”

Bibles? Handing them out? At School? What? Isn’t there some Church-State separation here?

My son held up up a pocket-sized volume of the New Testament, bound with faux, orange leather binding and embossed with gold lettering.

The book looked shiny and new, but I wondered, who in Hades was handing out Bibles to Walnut Creek Intermediate school kids?

As it turned out, as my son continued to explain, the Bible Guy wasn’t standing on school grounds when he handled my son the good book. Rather, the guy was on the trail–the Ironhorse Trail–when he made his offering. The Ironhorse Trail runs alongside the WCI playing field and is part of the East Bay Regional Parks District.

Still, hearing about this Bible guy made me wary.  Not because of the item he was handing out, but because he had approached my son and some other kids. I envisioned some disheveled guy, with a crazed look in his eye, hearing voices, and mumbling “Repent! The end is near!” Also, as I’ve reported on this blog in the past, there have been a couple incidents involving WCI kids on that portion of the Ironhorse Trail, at least one of which involved a suspicious behaving man approaching a student.

So, I followed my son and his friend back down to the trail, and I saw that there were two guys–two nicely but casually dressed older gentlemen. They each held cardboard boxes and, with smiles on their faces, were handing out the little orange Bibles to kids. “Would you like a Bible,” they were asking.

I approached them and asked where they were from. The Gideon organization, one of the gentleman told me, offering me a New Testament, which I took.

Back in the car, a discussion popped up among my son, his friend, and me, about the religion, Christianity, the difference between the New and Old testaments, and our beliefs. As I may have mentioned before, I’m not religious, and my family doesn’t attend church, but I told my son he might want to read some portion of the book he received. I said both the Old and New Testaments contain interesting, famous stories and lessons about life, and some beautiful writing. I mentioned that I had a former high school English teacher who now teaches a class on the Bible as literature at Diablo Valley College.

As if to punctuate my statement about the Bible’s literary value, my son’s friend happened upon a passage from Chapter 20 of the Book of Revelation, and read it aloud: “And He said to me, ‘I am the Alpha and the Omega, the Beginning and the End. I will give of the fountain of the water of life freely to him who thirsts.”