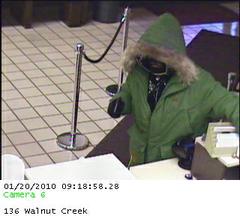 Two lone men, armed with guns, robbed two Walnut Creek banks of undisclosed amounts of cash in separate incidents. No one was injured in either incident.

The first happened Tuesday at about 10:52 a.m. at the Chase Bank in the Palos Verde Mall, located at the corner of Pleasant Hill Road and Geary Boulevard.

According to Lt. Brian Hill, the robber displayed a gun, demanded and received cash and left the bank. He was last seen climbing into a light-colored vehicle. The robber was described as a white male adult.

Says Sgt. Roman Martinez, the robber, armed with a handgun, entered the bank, showed his gun, and demanded money. After receiving the cash, the robber fled the bank.

He is described as a black male adult in his 20s, about 6 feet tall, with a medium build. He was last seen wearing an olive green parka with a fur lined hood, black ski mask, black shirt, black gloves, dark pants, and dark sneakers.

In both cases, the police searched the surrounding area, but couldn’t find the robbers.

Anyone with information on either robbery should call the Walnut Creek Police Department at (925) 943-5844.