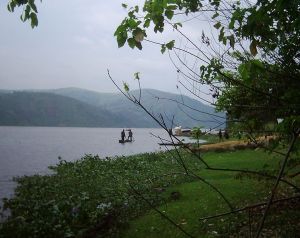 I love all the build-up to Christmas: buying the tree, decorating it, making cookies, wrapping gifts, listening to White Christmas for the 235th time in my life. And then the day itself hits, and I find myself waking up disappointed, moody, depressed. I suppose it’s like most everything in life: the anticipation and the wanting is more fun than the getting.

I really did have a lovely day. My husband and son and I opened gifts, then we went to my sister’s house.
Her daughter (my niece) and my niece’s little girls are visiting for the holidays while their dad, a pilot in the Navy reserves, is on duty in Bahrain. The little girls were tearing around with excitement. My other sister, husband, and daughters were there, too.
With the Great Recession in mind, we exchanged very modest gifts, if at all. Everyone did things very simply this year, either making gifts themselves, or like my husband and I, purchasing gifts that would benefit a good cause. My husband and I handed out note cards, hand painted by members of Creek Kids Care, a group of Walnut Creek elementary, middle, and high school students, who raise money for our local homeless respite and services center, Fresh Start Walnut Creek. My nephew gave us a jar of homemade pear and ginger jam, and another niece gave us a very beautiful card that she created herself. We ate a delicious and perhaps, non-conventional, Christmas lunch of pulled pork sandwiches.
Later, we walked to a nearby park, and my 5-year-old niece (her little sister was napping) sat on a playground structure with side-by-side steering wheels, and she and I played pilots on training missions (Her dad is also a commercial airline pilot). She and I twice had to parachute out of our plane when, first, a wing caught fire, and, second, when we wound up flying through an erupting volcano. Then my son taught my little niece, my sister, and me how to line dance. It’s one of his favorite activities in middle school P.E.
As I write this, I’m wondering why I was still feeling gloomy when we came home. I appreciate the day now as I write this. I feel fortunate and grateful to have such kind, intelligent, easy-going families.
Still, when we returned home yesterday, in the early evening, I started telling my husband, as I was close to tears, how much I hated myself, didn’t know what I was doing in life, and how I wanted to just disappear …
Talk about your existential crisis….
While he went into another room to chat with my son about something, I decided to try lift myself out of my sulkiness by reading something to take me out of my world. I picked up part two of a two-part New Yorker article about a writer’s driving trip through—get this—Siberia. He passes through the town where Rasputin was born, comes to great rivers that most of us have never heard of, and stops in huge cities—that most of us have never heard of—crumbling with Soviet-era apartment buildings that also are the sites of ancient battles and fortresses that the Tsars and the Soviet authorities used to house dissident writers, from Dostoyevsky to Solzhenitsyn.
The map accompanying the article, however, was useless. Who designed it? None of the rivers or cities I had been reading about are shown. So, I fired up Google maps, and began looking up these places. Those searches led to other side trips, including a detour into an article about Marco Polo. My son has this cool PS3 game called Uncharted II: Among Thieves, about a treasure hunter named Nathan Drake on a mission to find a legendary stone in the mythical Himalyan kingdom of Shambhala. But in reading about Marco Polo, you also get to luxuriate over geographic destinations with romantic sounding names: the Silk Road, Samarkand, Shangdu.
I continued to look up other places, off the beaten track of most mainstream tourist travel. Some are places I have had the privilege to visit—Laos, Cambodia; others are places I still want to go.
Before I die, I would like to see Africa, but not tourist safari Africa. I want to see those countries that have rich ancient cultures: a sub-Saharan land like Mali. It is very poor but it is also home to the Great Mosque of Djenné, the largest mud brick building in the world, whose original structure dates back to the 13th century.
And then there is Kinshasa, in the “Democratic Republic of Congo,” a country in the heart of Africa—and in Joseph Conrad’s Heart of Darkness. The country has a tragic, murderous history of European colonial and Cold War exploitation and a half century of corrupt, rapacious dictators, blood diamond greed, refugee crises, and devastating civil and continental warfare.
Yeah, I want to see Kinshasa, and the Congo River. Well, I am crazy. Supposedly, a very adventurous traveler could ride a barge up the Congo River. I’m not sure I’d have the guts to do that. Besides the Lonely Planet guide says women have to be especially careful in the Congo, because rape has been used extensively as a weapon among the still warring parties. I also checked out the CIA briefing on the–perhaps ironically named–Democratic Republic of Congo, and find that there is good reason that tourists are not flocking there.
But then, I come across this amazing website, which is designed to promote tourism in Kinshasa.
Seriously.
And this is one of the most surprising websites I’ve come across in a long time. Labeling Kinshasa the “capital de la musique,” the site is sophisticated, well-designed, well organized, and honest and direct about the upsides—and risks—of traveling to Africa’s third largest city and surrounding areas. The site quotes the Lonely Planet travel guide as describing Kinshasa as “a huge, sprawling city … hectic, confusing and colourful, a sort of New York of Central Africa. But the site’s safety page acknowledges: “Although Kinshasa offers many attractions, safety is not one of them. 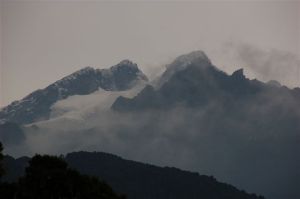 On Congo’s eastern border is the Virunga National Park (with Mt. Stanley, shown here), established in 1925 as one of Africa’s first national parks. Peaks in and around the park, which also border Uganda and Rwanda, rise above 15,000 feet and even have glaciers on them. The Virunga National Park is also a World Heritage site and is home to the famous mountain gorillas, whose population unfortunately has been seriously reduced by poaching and the country’s civil war.

Back closer to Kinshasa is the Chutes de Lukia, which feature natural lakes to swim in and a Bonobo (pygmy chimp) orphanage, where you can play with the younger chimps.
Giddy at my discovery of this site about Kinshasa, I showed it to my husband. He, too, was impressed by the site. However, he was not keen on the idea of swimming in any lakes in the Congo, not with the possibility of catching a water-borne illness that would make one of us really, really sick. (We had been down that road when we traveled in India.)
We then checked the tab that allowed us to figure out how much it would cost to fly to Kinshasa from San Francisco, via South African Airways: More than $5,000 for a round trip.
So, no, go. Not for now.
But, maybe one day… One can always dream of Kinshasa. And, my little virtual tour last night, on Christmas, to places with such amazing names, cultures, and histories—Luang Prabang, the Niger River, Tashkent, Kinshasa, the “Mountains of the Moon”—very much lifted me out of my Christmas Day blues. So does now, as I write this, reflecting on what a good day yesterday really was with my family.