First, forget the Jim Carey animated movie version of A Christmas Carol. Or don’t. I’ve heard it’s supposed to be pretty good, but Jim Carey usually gives me a headache, even when he’s in his “serious actor” mode, so this movie version is a no-go for me.

Besides, I’d prefer to see a live theater version of the Charles Dickens’ classic story of Ebenezer Scrooge and his Christmas Eve redemption. There is something more traditional about seeing it live, especially if it’s a version presented by a local professional company.

The production to see is the one at the Lesher Center by the resident theater company, Center Repertory. The company has been doing the show for 11 years, and, according to Contra Costa Times’ theater critic, it is one of the best staged versions of A Christmas Carol in the Bay Area, as good as the one presented at American Conservatory Theater.

The cast includes a number of Bay Area theater veterans and local kids and teens (from Walnut Creek elementary, middle, and high schools), sometimes getting their first chance to perform in a professional show. I’ve seen A Christmas Carol twice, and it’s well worth it. A Christmas Carol plays at the Lesher Center through December 20. For tickets and information visit www.centerrep.org. 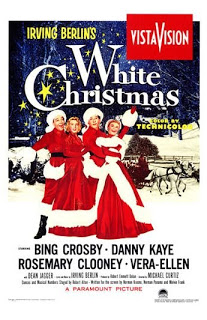 White Christmas at the Orinda Theatre on Saturday. This is the second film in which Bing Crosby sang his now classic holiday tune. I admit I prefer the first film, a 1942 black-and-white musical called Holiday Inn, starring Bing Crosby and Fred Astaire, as partners in show but rivals in love. Holiday Inn was about an entertainer who wants to get out of the rat race and open a Vermont inn that is only open on holidays. This musical features music by Irving Berlin and some killer dance numbers by Fred Astaire (and one unfortunate and anachronistic blackface production number). You should be able to rent it or catch it on TV in the next couple weeks.

Still, White Christmas, despite its somewhat fluffy and contrived plot, works. It was apparently conceived and enhanced with color and splashier sets to cash in on Bing’s White Christmas popularity. Here Bing’s partner in entertainment is comic singer, dancer, actor Danny Kaye, and his love interest is the radiant singer Rosemary Clooney (George Clooney’s aunt!). The production numbers are fun, and features some amazing dancing by the lithe Vera Ellen.

The two screenings of White Christmas at 4 and 7 p.m. are part of the California Independent Film Festival. Ticket sales will benefit the Lamorinda Teen Center, and both screenings will feature carols performed by the Miramonte High School Chamber choir.

2 thoughts on “Get your holiday entertainment on”