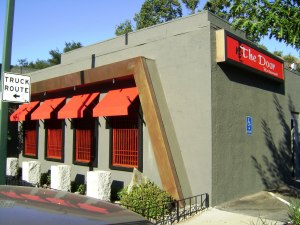 One of our favorite neighborhood “joints” is about to re-open. A new sign is up outside the former Zheng Long on South Main Street, across the street from Kaiser Permanente Medical Center. The new sign states the restaurant will be called The Door.

A peek inside shows that the renovations are almost complete and that the restaurant is just awaiting the arrival of furniture.

For those who follow downtown Walnut Creek’s restaurant scene, and are fond, like my family, of Asian cuisine, we all suffered a huge loss back in May 2008 when an accidental fire destroyed the interior of the pan-Asian restaurant.

The building has been undergoing renovations since then, with the restaurant set to re-open sometime by the end of this year.

Well, it looks like it will be re-opening soon. With the same owner, Steven Chen, according to a license on file with California’s Alcoholic Beverage Control. Just a different name: The Door.

Don’t know what will be on the menu, but we’re hoping it is reminiscent of what we so much enjoyed at Zheng Long.

Meanwhile, a Crazy reader reports that The San Franciscan on North Main Street will be shutting its doors this weekend. We heard this closure was coming. We just didn’t know when. Our reader says that the new restaurant going in will be–Asian-themed! Indeed, the state ABC says that an eatery called A Modern China Cafe has been issued a license to open there.

We remember that an upscale Vietnamese restaurant, Three Seasons Bistro, operated in that space at 1525 North Main Street, before being replaced by The San Franciscan.

9 thoughts on “Restaurant news: Zheng Long to re-open as The Door! The San Franciscan to close”