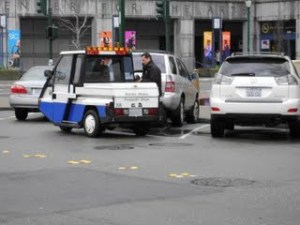 Was in one of those Locust Street nail salons, getting a pedicure, a necessary ritual, these days, of feminine maintenance.

I parked in the garage next to the Lesher Center, having learned hard lessons in the past about parking on the street when I’m not sure how long I’ll be in a certain business.
But another motorist didn’t know better, or forgot to feed his meter enough coins. Anyway, one of those usually dreaded city parking enforcement officers popped in to the salon and asked if any of the customers, enjoying foot soaks in massage chairs, had an Acura SUV. The officer was wearing a smile and cocked his head in the direction of the offending vehicle parked right outside the salon window. Basically, he was letting us know that if any of us were the owner, he’d be happy to let us run outside and feed some more coins in the meter.
Alas, none of the four or five customers was the Acura owner. The officer backed out of the door and popped his head into the business across the way, to ask if the Acura owner was in there.
There was a stunned moment of silence, and then the woman in the massage chair next to me said: “That was nice of him.”
“Yeah,” said a gentleman on the other side of me, getting his manly no-polish pedicure. “You don’t see that very often.”
We all shook our heads some more at what felt like an amazing event in downtown Walnut Creek: a parking enforcement officer giving motorists a break. By the way, the officer pictured above is not, I don’t believe, the officer who came into the salon today. Not to say that the guy pictured above isn’t equally as friendly…
However, I think the officer we encountered today is the same one who, yes, gave me a ticket a while back, but in an apolegetic way. Yes, it was one of those situations where I just made it back to my car, a minute or two late. He said he had already begun writing up the ticket; if he hadn’t, he said he would have let it slide.
The big questions facing us are: Was the officer acting on his own initiative–and will he get in big trouble, now that I’ve possibly outed him as being nice? Or has a message come from up in the parking department hierarchy that Walnut Creek needs to be a little less stringent in its parking policies?
As some of you know, I’ve had my own gripes in the past about the city’s seemingly mercenary parking policies. And, of course, a city task force is currently studying the vexing issue of downtown parking.
Oh, and by the way, I don’t know if the parking officer found the Acura owner or ended up having to issue the ticket. After recovering from my shock, I returned to reading People‘s article about the latest Jon Gosselin escapade.