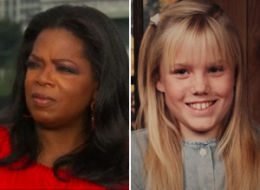 In today’s Contra Costa Times’ story about accused kidnapper and rapist Phillip Garrido’s bail being set at $30 million, the prosecutor urges the media to not hound his alleged victim, Jaycee Dugard, for interviews.

This plea comes amid reports, the Times says, that Oprah Winfrey had secured an interview, to air in December, and that she was paying $1 million for this scoop.
Oprah’s flak says, no, no, no, her boss has not secured the interview, and then sniffs: “We don’t pay for interviews.”
This response says that Ms. Winfrey is oh-so above hounding a traumatized crime victim like Jaycee Dugard for an interview.
Give me a break.
Sure, it’s probably true that Oprah has not yet secured the interview, but it’s not for lack of effort or desire on her part. In this interview with The Insider last week, the talk show queen (whose show’s ratings are suffering, by the way) states emphatically “I want Jaycee” and that she has expressly put her peeps on the job of nailing that interview. Remember, it was Oprah, also the Queen of Sensitivity, who was responsibility for this particular horror of reality TV. In 2007, she secured an interview with recently recovered teen kidnap victim, Shawn Hornbeck, shortly after his release from 51 months of captivity.
Regarding Jaycee Dugard, recovered after 18 years in captivity and who knows how many instances of physical and sexual abuse, Oprah tells The Insider’s Samantha Harris: “I want that interview.”
She continues: “Obviously, like everybody else in this business, I have ‘my people’ working on that. Now, this is the truth…I really don’t care about getting interviews first and all that stuff….Really, truly, I don’t play that game. I feel like if somebody wants to talk to me, they will talk to me. If they don’t want to talk to me and they want to talk to whomever, fine. But this is the one I want.”

2 thoughts on “Oprah’s so full of you know what. She says "I want Jaycee!"”