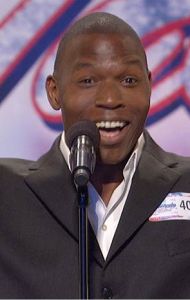 Someone posting on TV critic Chuck Barney’s blog on the Contra Costa Times suggested the R&B crooner sing “The Impossible Dream” for the September 16 finals.

Now I’ve got that Man From La Mancha tune worming around in my head. Anyway, Beaman, a native of Mississippi, learned, after performing Alicia Keys “Falllin’” that he is one of 10 vying for the big prize of $1 million and the chance to perform in Las Vegas.

I’ve never seen America’s Got Talent, and probably won’t start, after hearing that a recent episode featured judge David Hasselhoff (He’s a big music star in Germany, you know) performing with the Muppets. Yeah, yeah, who am I to sound snooty about a reality TV show? After all, for the past two seasons, I have found myself getting sucked into the American Idol sweepstakes and, more recently, the whole drama surrounding the great pressing question of who will replace Paula Abdul.

But I have to wish Lawrence the best. He sounds like a nice guy, and I’m intrigued by his Mississippi upbringing. Believe it or not, I’d love to tour the Deep South, including Faulkner Country. His America’s Got Talent bio says he had a “humble upbringing,” which is in “complete contrast to his booming voice and intense passion for music.” With both a gospel background and classical training, his repertoire grew … and his sound the great voices that have influenced his musical style: the depth of Barry White, the soul of Mahalia Jackson, the honesty of Bill Withers.

Sounds like this song might be a good match for a singer described by one critic as the “new Paul Robeson.”