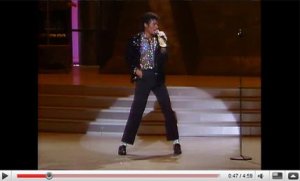 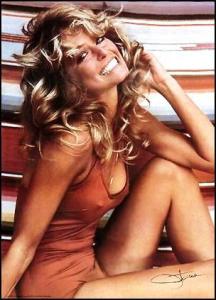 Farrah Fawcett and Michael Jackson: Okay, I’ll date myself, but the two were pop culture icons of my youth.

Both died today. Of course, it’s sad, and each summon different emotions of sadness, nostalgia, and reflection on their connection to us as cultural symbols and touchstones in our own lives.

Fawcett was 62 and died of cancer. Jackson was 50, was the self-proclaimed King of Pop, and died of sudden cardiac arrest.

I remember when she burst on the scene, with the poster above, and her year starring in the TV show, Charlie’s Angels. That was a show I never really watched when it was on. Probably because it was on too late, Wednesdays at 10 p.m.

But the first season (1976-77), in which Fawcett appeared, features the perhaps classic Charlie’s Angel episode. Called “Angels in Chains” and airing October 20, 1976, it is when the Angels, professional private detectives who use their–uh–feminine wiles–to nab bad guys, go undercover in a women’s prison. (Kim Basinger guest starred in this episode).

Can bad ’70s TV get any better than this? “Jiggle TV,” as it was called then, featured the hot actresses (Fawcett, Jaclyn Smith, and Kate Jackson) going undercover in a women’s prison that, best of all, includes scenes of the Angels, escaping while locked together–chain-gang style.

I also remember when Farrah was known as Farrah Fawcett-Majors because she was married to The Six Million Dollar Man star Lee Majors. That was before their 1982 divorce and before she hooked up with Ryan O’Neal.

As for Michael Jackson. Well, lots of people are saying lots of things. I just remember the early ’80s when he burst onto the music and global pop cultural scene as a solo artist, with his Thriller Album, and his MTV videos.

Jackson was a lot of things, great and kooky.

Of all many identities and accomplishments, he was a pioneer in the art of the music video, and in melding the personality, voice, and moves into an entertainment package. Like Madonna. Jackson was an all-around, bigger-than-life performer.

In rewatching his famous, career-transforming performance of his hit song “Billie Jean” for the Motown 25th Anniversary celebration in 1982, I feel my breath taken away once again. You can watch it here. Just like it was when my college friends and I first saw it when we watched the show live.

Jackson, for all his later quirkiness and possible criminality, exhibited pure genius in that performance–as well as in others that came later. In this Motown performance, he is the total package. Singer, actor, dancer. Actually, as a dancer, he moves with the grace, fluidity and confidence of a Fred Astaire, Gene Kelly, or Mikhail Baryshnikov.

He was a singular American talent.

One thought on “Farrah and Michael Jackson: Pop culture icons of my formative years, now dead”