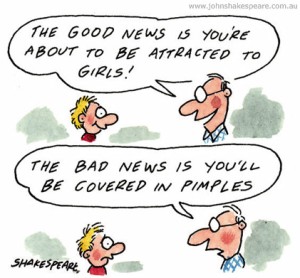 Is it necessary, at this age, for one gender to learn about puberty-related changes in the other?

I ask because I attended a presentation for parents of fifth graders in the Walnut Creek School District on the sex education curriculum the kids will be receiving in the next couple weeks.

Overall, I was pleased with the program. It seems designed to present information in a straightforward way. The information is basic biology, and geared towards kids who, we hope, are not yet sexually active. It focuses mostly on changes they may have started to notice that are taking place in their bodies. Also, the curriculum approaches the topic with sensitivity, recognizing that kids at this age are actually pretty modest, as well as confused, scared, or embarassed about these changes.

The school divides the fifth-graders according to gender, and the girls are taught by a female teacher and the boys by a male teacher. They take a pre-test to gauge their knowledge, then watch a film, which is tailored to each gender and shows different kids dealing with a range of issues. One girl, at a friends’ sleepover, gets panicked because she realizes that her period is starting and she doesn’t know what to do. She gets some help from her friends’ mom. A boy wonders hears about how is voice will change, and another worries about his penis size.

Then the film explains, with the use of visuals, the physical changes and gives the basic explanation for why they are happening: to prepare your body for reproduction.

The boys’ version shows how a penis gets erect during sexual excitement and ejaculates sperm. It mentions “wet dreams.” The girls’ version shows an egg getting produced in the ovaries, then beginning its journey to the fallopian tube. If it doesn’t get fertilized by a sperm, it continues onto the uterus. If Mr. Sperm hasn’t fertilized that egg, the blood and tissue that have built up in the lining of the uterus begin to slough off into the vagina. Drip, drip, drip—or gush, gush, gush, as sometimes seems to be the case, right ladies?

After watching to film, the kids get to ask questions, either by raising their hands or by writing out questions anonymously on cards that they are too embarrassed to let other kids know they are asking.

A big emphasis on the program is to teach kids overall health, wellness, and hygiene. It’s time for them to bathe or shower regularly and to start using deodorant—because they are going to start to smell when they sweat.

Oh, and one message for girls? Exercise is good for alleviating the discomfort of menstrual cramps. That’s right, P.E. teachers these days are more enlightened than when I was in high school and won’t let you out of volleyball, soccer, or running the mile, just because you’re “riding the crimson wave.”

I did wonder why the program doesn’t teach boys what’s going on with girls’ physical changes and vice versa. As it happens, my son is not at all interested in girls, barely talks about any of the girls in his class, either as friends or even as annoyances. I’m sure, though, he and his buddies are noticing that certain girls are growing breasts. And would it hurt for them to learn why this is happening as part of this curriculum? I asked the district nurse, who was presenting this session to parents.

She said something about it not being necessary or age-appropriate.One mother, sitting in front of me, nodded emphatically and stated she didn’t want her daughter seeing those diagrams of male penises, especially the one with an erection.

Meanwhile, another mother asked whether kids get any lessons in STDs. We were told that STD and HIV education is introduced in 7th grade.

After the presentation, that mother said she wished the fifth graders were getting the STD lessons now because she’s heard that some students at Walnut Creek Intermediate, as with middle school students elsewhere, are already sexually active and, specifically, engaging in oral sex.

As for my question about boys learning about girl stuff and vice versa, one mom said maybe that’s because it would make some kids even more uncomfortable and embarrassed. But another mother said she agreed with me. And we both shared stories of our sons coming up our supply of tampons and sanitary pads and asking, “Mom, what’s that?” I remember started to explain it to my son, but he rolled his eyes and looked bored.

We’ve already introduced the subject of body changes and sex with my son, in bits and pieces, as the subject comes up. Last summer, we gave him a book geared toward boys that talks about puberty, sex, STDs and so on, and told him to come to us with questions. I’ve also talked to him about birth control, after he asked how his father and I managed to not having any more kids.

With our son, my husband and I also came up with a good deterrent to prevent him from causing an unwanted pregnancy.

Not too long ago, he asked us, “Are having babies expensive?” “Oh, yes!,” we said, explaining all the stuff you have to buy for babies—and how it really cuts into your disposable income for the cool games and electronic gadgets you want to buy for yourself.

I’m hoping that message will mean he’ll put off sex until he’s responsible enough to always use a condom or to have an honest talk with his partner about the necessity of birth control. As you can tell, I’m not a fan of Sarah and Bristol Palin-style abstinence-only birth control messages.

39 thoughts on “Sex Ed question: Would it upset your 5th-grade daughter (or you) to have her learn about male reproductive organs, or your son to learn about girls’?”