Yeah, yeah, I know the recession has put a damper on our budgets for dining out.
But sometimes, I just don’t feel like cooking. Or I have a craving for a particular dish at a particular place.
Also, my husband and I don’t spend a lot on other things, clothes, electronic gadgets. So, eating out is our one indulgence.
Actually I got to thinking about writing about Walnut Creek eateries week when I heard two more people rave about the new Lettuce restaurant on Locust Street, across from the Lesher Center for the Arts. I was stunned. Basically, it’s a salad bar, I thought. How amazing can that be?

Well, all three people, who mentioned this restaurant, talked about its extensive selection for a build-your-own salad. One friend, who is a pretty discerning eater (she’s worked as a chef and done food writing), said the ingredients were very fresh, creatively presented, and full of flavor. She also gave high marks to the soups. So, did someone else I know who works near by. Then, another friend said it’s a great place to meet a pal for lunch. The food is good, and you can get in and out of there quickly. Yelp reviewers generally gave it good marks and describe it as “eco-friendly.” One reviewer says: “The to-go menu reads ‘Finest Quality Produce From Local Farm and Ranches.’ ” (Lettuce, 1632 Locust St., 925-933-5600).

As I reported earlier, another favorite eatery, Tin’s Tea House on Mt. Diablo Boulevard. Tin’s, the five-year-old sister establishment of the popular Tin’s Tea House in Oakland’s Chinatown, closed, was a favorite local source for dim sum.
My son and I went there the final weekend. The restaurant was packed! So, I doubt the restaurant was closing for lack of business. It didn’t seem to be suffering a decline in the number of patrons, unlike other Walnut Creek restaurants. Our waitress said the owner was looking for another location over here in the ‘burbs. (The original Tin’s is in Oakland’s Chinatown.) We were happy to hear that. The fact that the owner was looking for a new location also suggested that there had been some dispute with the landlord.
An especially annoying landlord dispute, involving what sounds like a particularly vexious landlord, also doomed Pinky’s Pizza (which closed in August) and Sunrise Cafe and Bakery. For me, Pinky’s provided my own lifelong standard. I grew up living in the neighborhood near Pinky’s and even went to school with the brother of the former owner, Tom Beisheim. So, that’s where my family would go out or from where we would order pizza. I still compare every pizza I eat–even when I was traveling in Italy–to what I used to get at Pinky’s.
Here are some other favorites–but I’d like to get your take on yours: 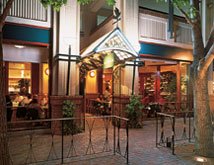 Favorite special occasion restaurant No. 1: Lark Creek Walnut Creek. It feels both sophisticated but also comfortable with its light and airy decor. The servers are friendly and efficient. We’re fond of the shredded barbecue chicken tamale pancake, the bacon-wrapped meatloaf, and any of their grilled fish dishes. It is owned by Bradley Ogden, who began his restaurant empire with Lark Creek Inn in Larkspur. His One Market, across from the Ferry Plaza in San Francisco, just won a prestigious Michelin one-star rating. The empire also includes Yankee Pier seafood restaurant in Lafayette, which I have not yet been to. Lark Creek Walnut Creek is at 1360 Locust St., (925) 256-1234.
Special occasion restaurant No. 2: Va de Vi Bistro and Wine Bar. Be careful. You can spend a lot of money requested order after order of its well-regarded small plates. My husband loves to go to lunch here on a warm, sunny day, where you can sit outside on a deck in a rear courtyard, in the shade of an old oak tree. The only downside to eating lunch there, for me anyway, is that I won’t order wine, because all be useless the rest of the days. And one of the joys of Va de Vi’s is its wine-tasting, wine-flight menu. And, its pours for those wine flights are pretty generous. So pace yourself.
Special occasion restaurants, No. 3, 4, and 5, the steakhouses: Vic Stewart’s, 850 South Broadway, (925) 943-5666; Ruth’s Chris Steak House, 1553 Olympic Blvd., (925) 977-3477; Fleming’s Prime Steakhouse and Wine Bar, 1685 Mt. Diablo Blvd., (925) 287-0297. Actually, I’ve never been to any of these. Aren’t the steakhouses pretty pricey? Readers, which ones have you been to? Which one of these are good and worth the price?
Asian delights: My husband and I lived in Asia for several years early in our marriage, so we’re fond of most anything Asian.
We’re love the Creek’s two Vietnamese restaurants: Le Cheval Restaurant (my husband’s favorite dish is the claypot), 1375 North Broadway, (925) 938-2288; and Huynh (the marinated beef in lemon dressing appetizer, topped with roasted peanuts and mint leaves, is amazing), 1512 Locust St., (925) 952-9898.
I’m also very fond of this Thai restaurant, Nalida Thai Kitchen, in the same strip mall as the Casper’s at the corner of Newell Avenue and South Broadway. My husband and I specifically lived in Bangkok, and Nalida reminds me of those family-run restaurants that populated every block of Bangkok. The ingredients in the dishes taste fresh (good cuts of meat and fresh veggies) and the flavors are sharp and spicy. Authentic Thai food is hot, hot, hot, and good Thai food requires a careful balance between spicy, sweet, sour, salty. Most of the Nalida dishes acheive that, from laab diced beef salad, with its hot and sour sauce, to the yellow curry with its spicy sweetness. Nalida is located at 1250 Newell Ave., (925) 935-9335.
Breads of India has the most awesome, warm, pillowy naan. I’m so grateful our son shares our Asian food obsession. The chicken tikka (marinated in pomegranate, nuts, and herbs), curries, grilled shrimp, he loves it all. 1358 N. Main St., (925) 256-7684.
We also love sushi, but, actually, we haven’t ventured to any sushi restaurants in town. Any suggestions?
Burgers: I always like a good burger. I miss Taxi’s and Johnny Rockets. We’ve recently discovered The Counter, which, similar to Lettuce, has a build-your-own concept. In this case, it’s build your own burgers. 1699 N. California, Blvd., (925) 935-3795. I’ve never been to Hubcaps, and I need to check out George’s and Mel’s. I heard that Bing Crosby’s Restaurant and Piano Lounge had great burgers (and great cocktails) but I’ve never been there.
Favorite comfort food: Mac and cheese from Whole Foods Market. A couple weeks ago, I stayed home from work. I had that crud of a cold. I wanted to eat but all I craved was something soothing. The first thing I thought of was the macaroni and cheese they make and sell at Whole Foods. I stopped by at about 4:30 p.m., and it turns out that several other people had the same idea. There was a woman and her teenage son waiting in line in front of me, and the woman and I exchanged a laugh about our Mac and Cheese cravings. She said it was her family’s favorite, too.
Treats: Chocolate crackle cookies, “gingeroo” cookies, and brownies from Walnut Creek Baking Company, 1686 Locust St., (925) 988-9222. Chocolate from Trader Joe’s, especially the dark-chocolate caramels, and the almonds covered with dark chocolate and sprinkled with sea salt.

9 thoughts on “What’s your favorite WC restaurant? Your favorite meal? Here are some of mine.”