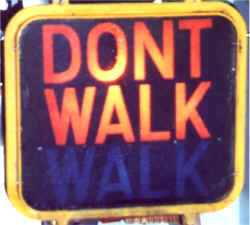 Okay, I might be hyping up the headline for effect. Whatever.

I was just at Whole Foods, waiting in line to buy some of their very yummy macaroni and cheese for dinner. Also waiting in line for a carton of Whole Paycheck–er, Whole Foods–mac & cheese was a mother and her teen-age son, a student at Las Lomas High. As we waited, the two started telling me about the big police sting operation in front of Whole Foods today.
This police operation targeted Las Lomas High Students. Apparently.
According to the mom and her son, about 30 students received jaywalking tickets this morning, while crossing Newell Avenue, either against the light or outside the crosswalk. All presumably were in a rush to get to school–first period starts at 8 a.m. The son said more students received these tickets this afternoon, when seventh period lets out at 3:05 p.m.
The tickets are $59!” the mom proclaimed.
I told her of my own battles with parking tickets, and of how the price I paid for my expired meters seems a relative bargain when compared to those jaywalking tickets ($35 a pop, unless I’m late with the payment.)
Walnut Creek police Lt. Mark Perlite, whom I reached early Wednesday evening, just as he was starting swing shift, said he wasn’t aware of any specific operation today targeting Las Lomas students. However, he wasn’t surprised if it had taken place. He said the police sometimes look out for jaywalkers in the downtown area, and might hand out tickets, and that includes to students at local schools.
Such efforts are part of the department’s efforts to educate the public about staying safe while walking in Walnut Creek’s often traffic-heavy downtown. The department is especially interested in keeping young people safe. “We want to educate these kids before something worse happens.”