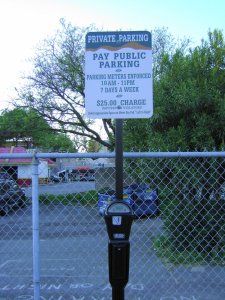 Ever get a parking ticket parking in downtown Walnut Creek? But not from the City of Walnut Creek for parking on the street at an expired meter, which is under the jurisdiction of a public, government entity.

I’m talking about those private lots in downtown Walnut Creek, like the lots behind Peet’s Coffee and Tea (pictured right) or Pyramid Brewery.

One legal expert says you don’t have to pay those tickets, although the companies that enforce parking on those private lots sure do a good job of making their meters and their tickets look as though they carry the “force of the law.”

But these privately issued tickets don’t have such force, this expert says, and Walnut Creek city staff concede that this expert has a point. 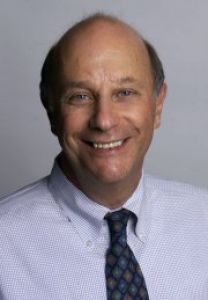 The expert I’m talking about is Len Tillem, the KGOAM810 radio personality and lawyer who has a noontime Monday-Friday show.

“If you get a ticket from the real cops, a city police department, if you don’t pay the ticket, it will ride on your DMV record,” Tillem said on his show Tuesday. “When you renew your registration, the DMV will make you pay it off or they won’t let you renew your car registration.”
Tillem was specifically addressing the practices of private parking lot owners in Walnut Creek—though his message could apply to private lot operators throughout the Bay Area. On his show, Tillem took a call from someone who identified himself as “Bill from Petaluma.” Poor Bill had found himself caught up in an all-too-typical and annoying downtown Walnut Creek parking snare.

Bill said he had come to Walnut Creek to meet some friends for lunch at a restaurant a week or so earlier. He parked in a lot near a restaurant off an alleyway. He didn’t mention the name of the restaurant, but the alleyway he’s referring to is probably Commercial Lane, which runs between North Main and Locust Streets. Bill said he parked, dashed into the restaurant to see if his friends were there, and got an unpleasant surprise when he dashed back out. There was a ticket on his windshield, which said he needed to pay $25 in the next 21 days. If he let the payment go beyond 21 days, the fine would go up to $40.

But Bill had his doubts. And he was right to have doubts, Tillem said, after Bill described the wording on the ticket.

Tillem took the matter one step further: “I would ignore it. You have a fake parking ticket. From a company that is operating a parking lot. I don’t think it has any force of law. It’s unenforceable.”

And, under the city ordinance dealing with private parking operators, no private operator can “threaten to report an unpaid notice of a parking charge to a credit bureau or a collection agency unless a small claims court or other judicial proceeding has established the debt.”

Moreover, Tillem said, Bill shouldn’t worry about this unpaid ticket being reported to the state Department of Motor Vehicles. “If you get a ticket from the real cops, a city police department, it will ride on your DMV record,” Tillem said. “When you go to renew your registration, the DMV will make you pay it off, or they’ll not let you renew your car registration.”

Yes, state law says the owner of the private lot can say you’re trespassing on private property and have your car towed. But that’s a different matter than just getting one of their tickets, and assuming (incorrectly) that the consequences will be the same as getting a city-issued violation if you don’t pay it.

Basically, Tillem said, it would cost the private parking lot operator a lot of time and money to go after Bill (or others of us) civilly to pay that $25 ticket—a lot more than accepting the loss of the $25 he refuses to pay. City law says the private lot operator must provide motorists with a process for appealing their tickets, which includes trained, impartial mediators to help settle disputes. That sounds like another costly endeavor for these private lot operators.

“You are correct that if someone doesn’t pay in response to a notice of a parking charge, this is not reported to the DMV and does not affect the renewal of a vehicle registration.” Rovanpera said. According to Rovanpera, the city attorney “added that the City does not have any role in enforcing the notices of parking charges.” Nor is the city involved in the mediation process.”

In response to a question I had about whether Walnut Creek in any way benefits financially from the revenues these private lots earn by issuing tickets or towing cars, Rovanpera said: “The city does not benefit financially from the private parking enforcement companies other than receiving the payment of business license taxes that are applicable to all businesses.”

Thanks Mr. Rovanpera for giving the city’s take on this issue.

And thanks to Len Tillem (I’m a fan of his show, when I get the chance to listen to it) for addressing this downtown Walnut Creek parking perplexity. I know it has been a source of frustration for me and for a fair number of people I know who live in Walnut Creek or who regularly shop and dine here.