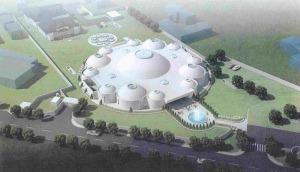 Readers, sorry, this is a long post, but it’s one of the weirder, more disturbing neighborhood disputes I’ve ever come across. The illustration at left says a lot.

On a rainy night two weeks ago, more than 200 residents of Saranap, an older unincorporated neighborhood between Walnut Creek and Lafayette, gathered together. It was the first general meeting of a new campaign called Save Our Saranap.
These were a fraction of the nearly 750 residents who have signed onto this campaign, many anguished and frustrated by a series of disturbing events that have taken place in their neighborhood over the past year.
These events all swirl around on a development, a massive, 66,000-square-foot white domed sanctuary, or “school of worship,” that a Saranap-based religious organization wants to build in their neighborhood.
The organization is called Sufism Reoriented, and the aerial view is above. Sufism Reoriented is based in Saranap and has some 350 members, about half of whom live in there. Save Our Saranap members say they have co-existed with Sufism members peacefully for decades.
Why wouldn’t there be a long history of harmony with Sufism members? After all, Sufism Reoriented says its teachings are “designed for individuals who strive to devote their lives to the love of God through service” and whose members “work in harmony with all religions.” Despite its name, the organization is not affiliated with Islam, but follows the teachings of the late Meher Baba, a spiritual leader from India who chartered the organization in 1952.
Sufism Reoriented also runs the well-regarded White Pony preschool and Meher K-5 Schools in the neighborhood. Some Save Our Saranap members send their children to the Meher school. I, myself, have friends and acquaintances who send or have sent their children to these schools; all report positive educational and social experiences for their kids.
By the way, I don’t live in Saranap, but have friends who do and who have signed onto the Save Our Saranap campaign.
So, what happened to make everything go so wrong?
Late last spring, these friends started telling me head-shaking stories about how their Sufism neighbors were bombarding them with press releases, expensive newsletters, and aggressive door-to-door visits to disseminate information about the project. My friends say the information and the manner in which it was delivered was misleading, evasive, downright deceptive, and condescending. They say Sufism members subtly or overtly played the religious-intolerance card—as in, if you don’t agree with how wonderful this project is, and how wonderful we are, then you are a religious bigot and anti-Sufism.
I myself was contacted by someone advocating the project. He didn’t identify himself as a Sufism member, even though I knew he was. To sell me on the project, he made false claims, such as that there was no opposition even though I knew there was. The communication reminded me of something voiced by a functionary from an Orwellian horror story, a “Freedom-is-Slavery,” denial-of-reality style of propaganda. I immediately understood why my Saranap friends shuddered at the memory of their encounters with Sufism members over this project.
On the face of it, the project sounds oh-so wonderful. The sanctuary would rise on a 3.25-acre site along Boulevard Way. The sanctuary would house classrooms, chorus rehearsal studios, and offices, and those 13 domed structures would be “inspired by Mt. Diablo and surrounding hills.” Sufism Reoriented also claims that the building would be environmentally friendly and would “have little visual impact” on the surrounding neighborhood because two-thirds of it—46,000 square feet—would be built underground.