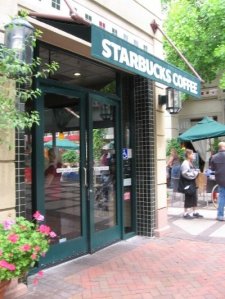 A day after Starbucks announced some shocking news—that it would stop continuously brewing decaffeinated coffee after noon to cut waste and costs—the Seattle-based coffee house chain delivered more bad news: that it would cut 6,700 jobs and close 300 more stores.

Starbucks Corp. announced today that it had reported a first-quarter profit that fell more than analysts estimated. Sales in established stores dropped in November, with customers pinched by job losses and falling home prices cutting back on premium coffee.
In a memo, Chief Executive Howard Schultz said 200 of those stores would be underperforming locations in the United States. The new store closures come on top of the 600 Starbucks announced this past summer that it would close.
The final list of new store closures would be announced by September.
As for the news about the reduction in decaffeinated coffee service, Schultz hopes the company will save $400 million by September by only brewing smaller pots of decaf on demand. Last year, the company started brewing fresh pots of coffee every 30 minutes, but it will only have the caffeine-free version available on request after 12 p.m.
Personally, I’ve stopped indulging in my near daily latte habit. If I need a caffeine fix before work, I now stop by my neighborhood 7-Eleven.
But I stopped in this morning at the Starbucks on Locust Street in Walnut Creek and asked the barista if his shop was going to institute the reduced caffeine policy.
Although the company says it had informed the baristas of the decaf change yesterday, this barista said his shop hadn’t yet received word on it.

6 thoughts on “Will your local Starbucks close? Do you still have the money to spare for $3 lattes? Will you miss that afternoon cup of decaf?”