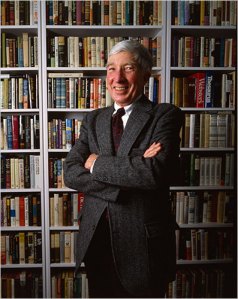 John Updike, one of the pioneering voices examining the craziness of the emerging suburban landscape of post-World War II America, has died. His publicist announced Tuesday that he passed away at age 76 of lung cancer.
Updike was a Pulitzer Prize winning writer whose books were also best-sellers and spanned genres, from short stories to several-volume epics that sought to say the big sweeping things about our country that you find in the proverbial Great American Novel.
The New York Times eulogized Updike as a “novelist who opened a big picture window on the American middle class in the second half of the 20th century. … In his most resonant work, Mr. Updike gave ‘the mundane its beautiful due,’ as he once put it, memorializing the everyday mysteries of love and faith and domesticity with extraordinary nuance and precision. In Kodachrome-sharp snapshots, he gave us the ‘50s and early ‘60s of suburban adultery, big cars and wide lawns, radios and hi-fi sets, and he charted the changing landscape of the ’70s and ’80s, as malls and subdivisions swallowed up small towns and sexual and social mores underwent a bewildering metamorphosis.”
As it happens, I have sitting on my book shelf a paperback copy of his controversial 1968 novel Couples. Although, Updike had already published Rabbit, Run, the first in the four Rabbit books for which he would probably be best identified, Couples was the book that actually made Updike a household name. The book is about a group of spouses bringing the sexual revolution home to their Massachusetts suburb.
In December, the London Daily Telegraph interviewed Updike and called Couples, “a brilliantly realized anatomical (in every sense) study of adulterous liaisons among a group of young professionals in the Massachusetts town of Tarbox—a thinly veiled version of Updike’s home town of Ipswich. Never before had a writer dwelt quite so attentively on the matter of marital infidelity—‘its adventure, the acrobatics its deceptions demand, the tension of its hidden strings, the new landscapes it makes us master.’ Updike is pleased to be reminded of Couples. It was criticized at the time, he remembers—‘’for its stylistic excesses and too much huffing and puffing about not enough’—but it went on to become his first, and only, No. 1 bestseller, and remains his biggest commercial success.”
It looks like, if I get the time this weekend, I’ll finaly crack open Couples to find out what all the fuss was about, and I’ll contemplate how much it relates to any messing around going on around in our fair suburbs.
(But, these days—with the economy in shambles, and people all depressed about finances or stressed out and working harder than ever to keep the jobs they have—who would have the time or energy to put into the effort required to have an affair?)