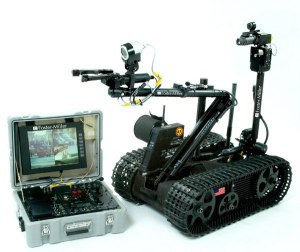 The Walnut Creek City Council recently gave approval to the Police Department to use already designated state Homeland Security funds to buy a new bomb-detecting robot and to upgrade the wireless operating system on an existing robot used by the department’s Bomb Team. The total cost for the new robot and the upgrade is $261,000, for which the city will be reimbursed.
The new Talon robot will help the WCPD, which has the county’s only bomb team, to investigate and dispose of explosive devices found anywhere in Contra Costa County. (The robot pictured here is not the actual robot the WCPD is ordering, but is similar to the line of Talon robots that the Massachussetts-based manufacturer, Foster-Miller, is developing for domestic police agencies.)
The new robot can also detect hazardous materials, WCPD Lt. Mark Covington tells me. The department has a cooperative arrangement with all the other police agencies in the county to send its bomb team out to scenes where suspected explosives are located. Covington says that his department’s bomb team handles 40 to 50 calls a year.
This robot is part of a county Office of Emergency Services effort to help local police uncover “weapons of mass destruction,” according to Covington’s report to the WC City Council. (Hmm, maybe the “weapons of mass destruction” that the United States didn’t find in Iraq are stashed somewhere in Contra Costa County.)
Anyway, speaking of Iraq, a 2007 Wired magazine blog talks about how Foster-Miller has long made similar robots for the US military to use in Iraq. The company has begun to market a special line of remote-controlled robots to civilian police departments in the United States, specifically for use by police SWAT teams and bomb squads.
Covington says the department will order the new robot soon, but doesn’t know yet when it will be delivered. He adds that this new robot is smaller and faster than the robot the department now possesses, and will allow the bomb squad to respond to multiple incidents. The department’s existing robot enjoyed its 15 minutes of fame last March when it was photographed for print and TV media, being sent into a home police had surrounded near downtown Walnut Creek, because a homicide suspect was believed to have barricaded himself inside.