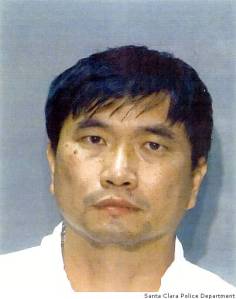 An engineer and father of three, just laid off from a Silicon Valley semiconductor startup, was arrested Saturday for allegedly opening fire at his workplace the day before and killing two men and one woman: the company’s CEO, the vice president of operations, and the head of human resources.

The shooting happened at about 4 p.m. Friday at SiPort, a company in Santa Clara, near San Jose, that develops digital radio semiconductors, according to the San Francisco Chronicle. Earlier that morning, the suspect, identified as Jing Hua Wu, had been laid off, reportedly for poor performance. Wu, according to the Chronicle, is married, the father of three sons, and lived a quiet life in a pleasant house off a suburban cul-de-sac in a nearby suburb.

It just so happens that on Friday, the Silicon Valley giant, Sun Microsystems, announced it was cutting up to 6,000 jobs—about 15 percent of its workforce. News also came Friday that retailers nationwide suffered their steepest decline since 1992. And on Monday came news that New York-based Citigroup Inc. is cutting approximately 53,000 more jobs in the coming quarters. GEC (Global Economic Crisis) and TNU (The New Uncertainty) strike again.

Do GEC and TNU play a role in this Silicon Valley shooting spree? Was Wu, like other people, feeling stressed out, scared, that the world is spiraling out of control?

Well, GEC and TNU certainly provide a backdrop to this office park massacre—even if Steve Lodge, the police chief of Santa Clara, the town near San Jose where the killing took place, refused to assign blame to the economic downturn. There’s been a lot of speculation about that, the chief told the Chronicle, “and it is just that—speculation.”

By the way, Santa Clara is about an away from my hometown of Walnut Creek. A fair number of people in Walnut Creek and surrounding towns commute to high-tech jobs in the Silicon Valley.

About the shooting and Wu’s arrest, the Chronicle says:

Wu returned to SiPort at about 3 p.m. and requested a meeting with the CEO, vice president and head of human resources to discuss his potential future employment. He gave no indication of his intentions until he pulled out a 9mm handgun at shot his three victims at about 3:53 p.m.

Wu sped off in what was believed to be a silver Mercury Mountaineer. He was picked up the next morning in the nearby city of Mountain View, where he lived. He was booked into the local county jail on three counts of homicide.

A neighbor of Wu’s was more willing than the police chief to wonder how much GEC and TNU played a role in Wu’s alleged actions. Wu, he told the Chronicle, “wasn’t the kind of guy you’d expect that would be involved in something like this. Geez, I wouldn’t even have thought he’d own a gun.” But recent layoffs, the neighbor said, show that “there are a lot of people who you wouldn’t expect to be out of a job now are.”